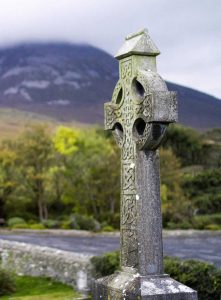 Westport, on the banks of the river Carrowbeg is one of only two planned towns in Ireland and is but 250 years old. It’s Gaelic name Cathair na Mart translates as ‘The Stone Fort of the Beeves’.

The territory around Westport, known to the Geals as ‘Umhalls’ was for a long time the stronghold of the O’Malley Clan. When the Normans came to Ireland they adapted to the Irish ways becoming ‘more Irish than the Irish themselves’. It was the Bourke’s (Norman de Burgos) who settled in this area in 1235 and soon became the allies of the Clan O’Malley.

Three centuries later the English Governor of Connaught, Sir Nicolas Malbay was to destroy the O’Malley stronghold but after years of struggle and confusion Tibod-na-Long’, son of Grainne O’Malley and Richard Burke was named Viscount of Mayo. It was his successor, John Browne who is credited in planning Westport town between 1750 and 1760.

John Browne, married to Maud Bourke, was one of the men who drafted The Treaty of Limerick. In 1732 he engaged Richard Cassel, (the architect who designed Leinster House and Carton House), to start work on Westport House. At this point, Westport was still a small village. The first buildings in the town were 2 storey and built in stone with slated roofs and small windows. The original town was to spread from John’s Row to Tubberhill and from West Road & Peter Street to Church Street. These streets were named after local features or members of the Browne family.

Over the next 50 years, under the supervision of the Browne family, the town was to expand significantly and with the expansions came heightened prosperity. A linen industry was established in the the early 1770s. Next came a small port on the quay and markets for linen and agricultural produce. Further work was carried out on Westport House by James Wyatt and English architect in 1780 and extensive oyster and herring fishing occurred in Clew Bay. The port was fully developed by 1818 as were the Malls on the banks of the Carrowbeg. Westport was becoming a major financial centre of the West and the Bank of Ireland and Post Office were completed by 1825.

Tragically, Mayo was one of the counties worst hit by The Great Famine and the Brownes, (now the Earls of Altamont) were forced to move from Westport House to the town. The industrial revolution caused further problems to Westports prosperity. With it came the decline of the linen industry and railways came to replace ports in the transporting of goods. In fact, it was not until the 1950’s that Westport town again began to flourish.

Today Westport is a vibrant and booming town with a healthy tourist industry and a great reputation for sea angling, golf and sailing. Westport is also an affluent centre of commerce, hosting such companies as Allergan Pharmaceuticals, Gammaster, Trouw, The Hughes Group and The Berry Print Group.

You can find out more about which cookies we are using or switch them off in settings.

This website uses cookies so that we can provide you with the best user experience possible. Cookie information is stored in your browser and performs functions such as recognising you when you return to our website and helping our team to understand which sections of the website you find most interesting and useful.

Strictly Necessary Cookie should be enabled at all times so that we can save your preferences for cookie settings.

If you disable this cookie, we will not be able to save your preferences. This means that every time you visit this website you will need to enable or disable cookies again.